From opm
Jump to: navigation, search

This page documents a utility that generalizes Backus upscaling to general geometry. Elastic moduli specified on a cell-basis on corner-point grids can be upscaled to an elasticity tensor with possibly 21 independent components. The code simulates the 6 load conditions (three normal and three shear forces applied to the geometry) necessary for determining the elastic properties.

where filename.grdecl contains the grid as specified by the Eclipse keywords SPECGRID, COORDS and ZCORN, rocklist.txt contains information about where rock-files per rock type is located and outputfilename.txt is the name of the file to write the output.

Elastic moduli for each input cell can also be specified on a per-cell basis in the grdecl-file, by means of locally defined additional keywords, see the page on corner-point grids for details. However, this has a bug in the current version and need to be fixed.

There are also some options that are mostly relevant for debugging and testing. These are only included here for completeness.

The files rock1.txt, rock2.txt, ... can have different formats depending on the anisotropy of the rock; isotropic, transverse isotropic or anisotropic

For isotropic materials, the format has four lines;

for a material with bulk modulus 8 GPa, shear modulus 2 GPa and density 3 kg/m3

For transverse isotropic materials, the format has four lines;

For general (anisotropic) materials, the stiffness matrix have the following format

The simplest approach is the multi-point-constraint (MPC) approach. Here, one edge is chosen as a master edge, and edge as the slave edge. Strong couplings between nodes are then established, making nodes on the slave edge a linear combination of nodes on the master edge. This is the direct extension of the approach used for matching grids, where nodes are coupled through single-point-constraints (SPCs), e.g. s=m1. 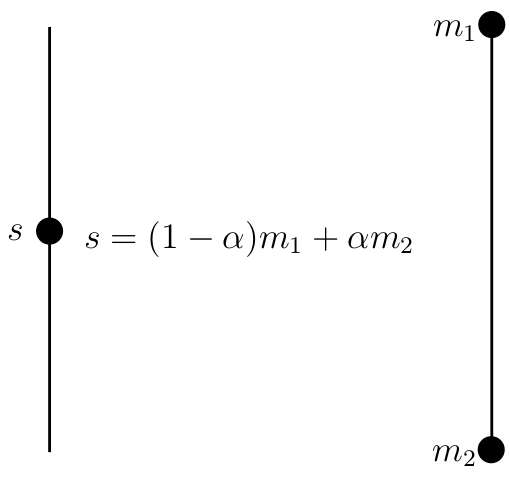 It turns out that while SPCs work very well for matching grids, the MPC approach is not optimal for non-matching grids. The reason for this is that, while we do get pointwise periodic solutions in the nodes, this pointwise periodicity do not guarantee that the boundary integral associated with the weak form of the upscaling problem actually cancels out.

The resulting linear system of equations if of the form

This system is SPD. Thus it can be solved either using a sparse Cholesky (LU) factorization (linsolver_type=direct) or through conjugate gradient iterations with an AMG preconditioner (linsolver_type=iterative).

The Continuous Lagrangian Multiplier (CLM) method was then chosen. This is heavily inspired by Mortar methods, and is referred to as Mortar for simplicity in the application. But strictly speaking it is not a Mortar method in the original definition of the term, so we invented the name CLM to make this clear.

Here we work directly with the boundary integral. The original linear system of equation is augmented with the requirement that

refers to the displacements on the left and right boundary, respectively.

Thus far this is a vanilla Mortar approach. What distinguishes our method from a real mortar method, is our choice of mesh for the multiplier

. In a normal mortar approach, the multiplier mesh is taken as the footprint/intersection mesh of one boundary on the other. This would be quite the challenge to implement reliably for the highly degenerated meshes we have to deal with. Thus, a different choice is taken here. The interface-mesh is taken as the columns of the corner-point grid. This simplifies the computations substantially since we know that while the boundary meshes do not match in general, they will always both be subdivisions of the columns. We can thus assemble the operator corresponding to the constraints column by column in a straight forward manner. 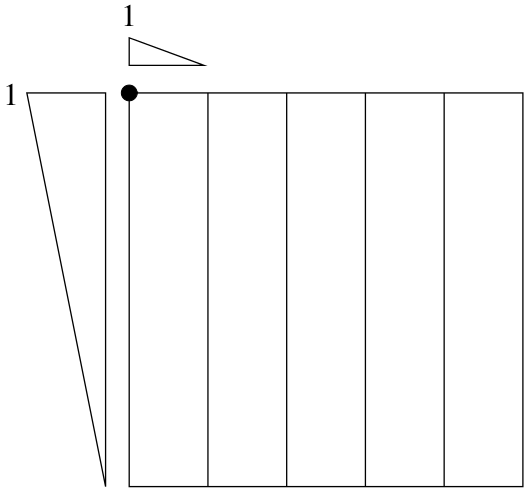 By default, the multipliers are linear in 'u' and quadratic in 'v', not bilinear as illustrated in the figure above. One can change the order of the multipliers in 'v' direction through the 'lambda(x|y)' command line parameter. Note that the x and y refers to the *constant* coordinate on the cube face. They are always linear in 'u'.

The resulting system of equations are on the form

will run the computation using 3 threads.

Note to sysadmins: You should set the affinity of the OpenMP threads to ensure we utilize the maximum memory bandwidth available on the system, i.e. spread them around on different physical cores. For GNU see here

A short description of the iterative solver follows.

With the MPC method, the linear system is symmetric and positive definite, and conjugate gradient iterations are appropriate. As the preconditioner

, algebraic multigrid is employed. Currently, the AMG is configured with 2 pre smoothing and 2 post smoothing steps, SSOR is taken as the smoother and a direct, coarse solver is employed.

If a symmetric solver is used, the

block in the first row is dropped. We explicitly form the preconditioner, and invert using sparse LU factorization.